Learn more about EALC and what we have to offer at https://linktr.ee/ealc_ucdavis 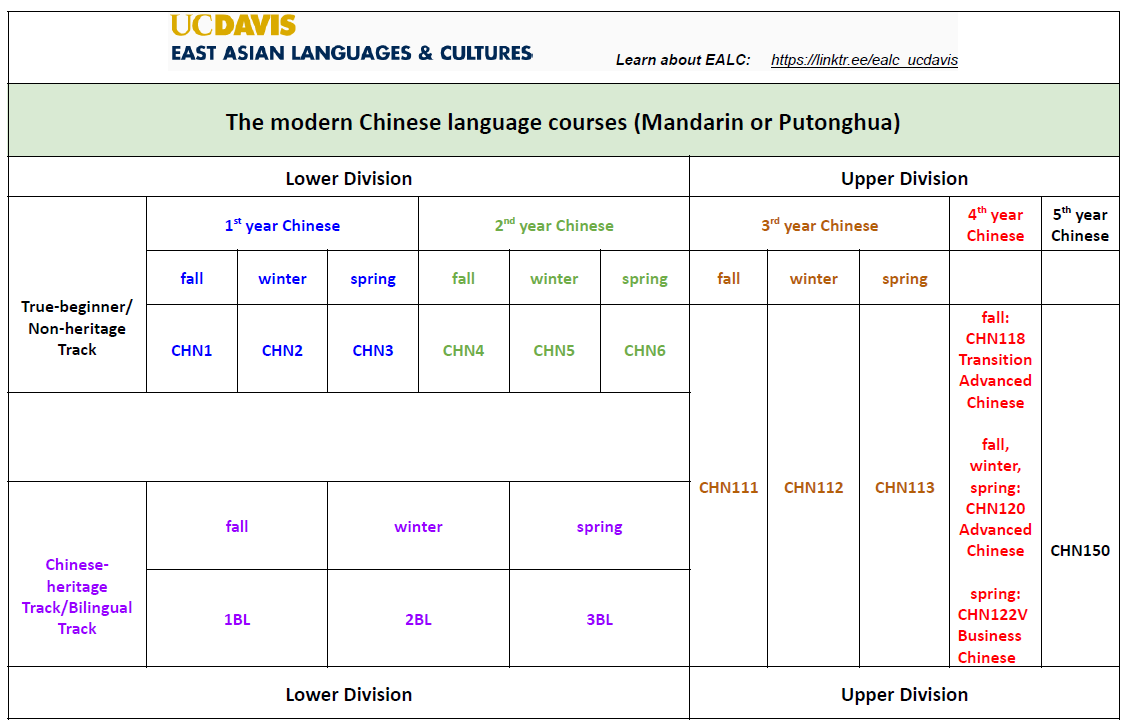 Students should take the Chinese Placement Evaluation to take modern Chinese language courses. According to the test result, you will be directed to the appropriate course for your level.

CHN 114, 115, 116, a one-year Introduction to Classical Chinese course series, are offered at UC Davis. In these classes, students will read texts and texts excerpts selected from classical Chinese writings of authors of Pre-Qin to Qing. The focus will be on laying a basic foundation of Classical Chinese grammar and vocabulary and developing competence in comprehending classical texts. Additionally, core issues of culture and history of ancient China that relate to the texts are also discussed.  Students completing CHN 112 would be ready for this course series.

Currently one linguistics course, “CHN 160: The Chinese Language,” is offered once a year. This course is in general NOT a Chinese language skill course like CHN 1, 2, 3 or 113, 120 etc. It is a lecture-based theory and knowledge course ABOUT Chinese language, especially its internal organization. The course introduces fundamental characteristics of the structure of Chinese sound system, word formation, grammatical constructions, and writing system (i.e., characters). Issues of language variation, especially standard and non-standard Chinese, and relevant historical and social background of Chinese are also discussed. CHN 160 is required for the major. To take CHN 160, students must have successfully finished CHN 6, 3BL or 3CN, or have an equivalent Chinese competence.