Walk in U.S., Talk on Japan

Light refreshments will be served

The East Asian Languages and Cultures Department hopes you will attend “Walk in U.S., Talk on Japan.” Headed by Former Japanese Ambassador to U.S. Fujisaki, the delegation members will discuss important factors of future United States - Japan relations and recent developments in Japan.  Since the program’s launch in 2014, twenty-two delegations have visited thirty-six states and eighty-three cities throughout the U.S.

Ambassador Fujisaki has a wealth of experience living and working in the U.S. After starting his career as a diplomat, he served in Washington, D.C. twice, first as a political minister in the 1990s and again as the Japanese Ambassador in the United States from 2008 to 2012. During his career, he also served in Jakarta, Paris, London, and Geneva. In Tokyo, he was the Director-General of the North American Affairs Bureau at the Ministry of Foreign Affairs before being appointed Deputy Minister for Foreign Affairs in 2002. At present, he is the President of the America-Japan Society and President & CEO of the Nakasone Peace Institute.

Ms. Miyake is the second daughter of the 19th head master of one of two traditional families of the Izumi school of Kyogen performers, and is only the second woman to perform Kyogen professionally in Japan. She was born in 1972 and first appeared on stage at the age of three. In 1989, she inherited her grandfather's stage name, Tokuro Miyake, and received a letter of appreciation from the Minister of Education, Culture, Sports, and Technology. She has performed Kyogen in the U.S. and ten other countries.

Ms. Yuko Chujo currently lives in Tokyo and works as a banker at an American financial institution. She started her career at a Japanese government-owned bank, where she was engaged in the bank’s fundraising activities as well as the provision of loans to support Japanese companies’ overseas ventures.

Mr. Yoshiki Hatta is a PhD student specializing in asteroseismology, a branch of stellar physics, at the National Astronomical Observatory of Japan. He is interested in how stellar internal structures can be mathematically related to their oscillations, and aims to become an asteroseismologist in the near future. Prior to the PhD program, he was an active college football player. The sport taught him the importance of working together as a team, and he believes that this experience will be very helpful in his future career.

Ms. Aya Sakai is a student at the Department of Child Education at Japan Women’s University. She gained valuable experience studying abroad for a month in Australia and seven months in the United States. During her time in the U.S., she volunteered at a public elementary school in addition to her university studies. She also plays the saxophone and is a member of a local symphonic wind orchestra club. 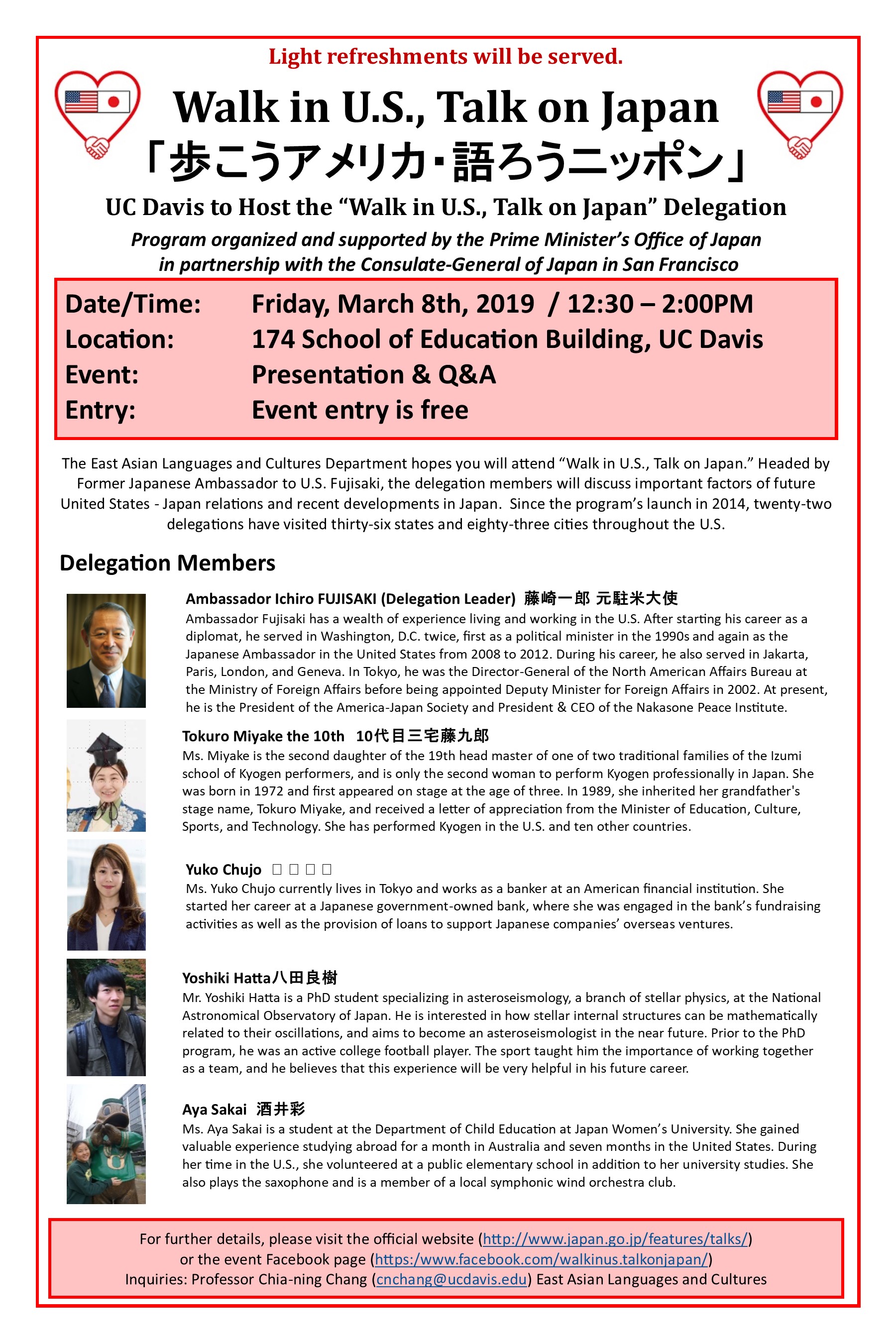